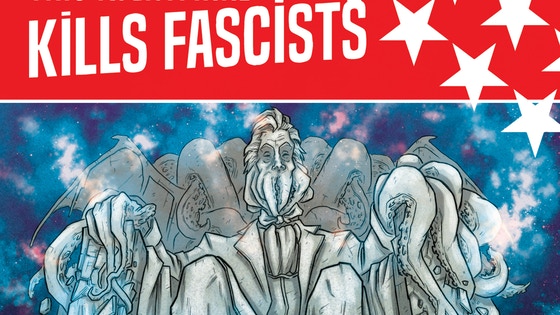 A horror comics anthology in the tradition of Creepy and Eerie, reflecting on world politics in 2017, as told by some of today's top talents. This Nightmare Kills Fascists is a 176-page black and white horror comics anthology filled with stories reflecting on the state of international politics in 2017. Editors Matt Miner and Eric Palicki envisioned a collection of stories giving contributors a chance to interpret the unease surrounding the current state of the world through the dark lens of horror.

Latest Updates from Our Project:

Matt Miner here, and I just launched DEATH TRAP on Kickstarter.  It's absolutely wild and fun and a bright spot in an otherwise dreary existence as of late.  I urge you to check it out and help us over goal!  You don't want to miss this!

Death Trap is a story about a young woman named Ollie who grew up in the Strongin Circus crime family, surrounded by sideshow freaks and weird clowns and a huge albino dancing bear named Wojtek.  Her Dad’s killed by a rival crime family at Davenport Amusements, and ends up haunting his old Mercury Cougar muscle car.  So Ollie and her dad’s ghost team up for some sweet, sweet, revenge.

Sounds awesome, right?  Click through now and grab an exclusive cover that won't be in comic stores, or grab the whole trade paperback/graphic novel for the entire story!  Thank you, everyone!

Quick note to highlight a new Kickstarter I (Matt Miner) am contributing a story to.  This is a big one and is gonna be SO cool - a metric ton of talented people sharing 9-panel stories to help you nail a new skill.  Learn how to do all kinds of rad stuff from folks who have it down pat.

Hey, Amateur! is a life-hack graphic novel with tips and tricks told by some of the smartest comic creators to walk planet Earth.

Back it today and thank me later - you do NOT want to miss this!

Hey everyone,Quick note to let you know that TNKF co-editor Matt Miner has a new Kickstarter up for a book the Westboro Baptist Church said would "split Hell wide open" (really)!

Just launched today and we need a strong start - back today and grab the early-bird special with a free headsketch of YOU, zombiefied!

Thanks to a very successful Emerald City Comic Con, I was able to (finally) get most of the rewards promised by contributors, and aside from a handful of sketch rewards, I've sent everything to backers. Keep an eye on your mailboxes, if you haven't received your rewards already.

Thanks again for your support and Olympic-levels of patience while I sorted out these last rewards.

I also want to point you in the direction of the new project from A Wave Blue World, DEAD BEATS, a collection of short comics exploring the intersection of music and horror. I'm co-editing the book alongside Joseph Corallo (Mine!) and the campaign is being shepherded by Tyler Chin-Tanner (All We Ever Wanted), who is much more capable than I.

Contributors to DEAD BEATS include Vita Ayala, Ivy Noelle and Steenz, Daniel Kibblesmith, Rafer Roberts, Richard Case and Rachel Pollack (reuniting for the first time since they worked together on Doom Patrol!) and many more!

You can find the campaign here: awbwkickstarter.com

First of all, thanks to all of you for your continued patience and support!

The good news is, out of over 500 backers, we're down to fewer than 20 of you who have outstanding rewards.

To those of you remaining, I can provide an update. We're still waiting on a handful of rewards to come in from those third party creators who've graciously pledged to provide books to use as rewards. They've all been (somewhat forcefully) nudged to provide those rewards. Artists have been given their commission assignments and will be providing the original art in the near future. Finally, Adrianne (recently engaged! Yay!) has decided to come TO SEATTLE to sign copies of NO ANGEL. This means all remaining rewards should be in the mail soon.

If you have questions about the status of your specific reward, please use either the send message function or email me directly (epalicki@gmail.com), as I can't reply directly to comments left on the campaign page.